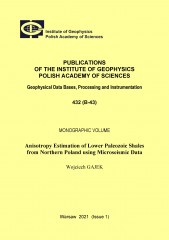 Downhole microseismic monitoring is a widely used tool for the assessment of hydraulic fracturing job effectiveness. During the process of fluid injection into the reservoir, new fractures develop due to the induced pressure, which gives rise to microseismic events. Therefore, the knowledge of an accurate velocity model is necessary in order to locate the induced micro-seismic events. Subsurface complexity is often raised by a horizontal layering, an intrinsic anisotropy of shales, and aligned fracture sets. That introduces anisotropic effects into the velocity field. In such a case, the anisotropy should be taken into account during the velocity model building. Otherwise, some errors will be introduced into the microseismic event locations, and hence, the interpretation of treatment effects will be biased. Therefore, this thesis is devoted to the anisotropy estimation using downhole microseismic data. It examines possible location errors caused when the anisotropy effect is not considered and proposes a technique of anisotropic velocity model inversion. It also presents field data examples of anisotropic model building and fractures characterization.
In this thesis, I introduce a new technique for anisotropic (VTI) velocity model inversion based on traveltimes of the P-, SH-, and SV-waves onsets and probabilistic event location algorithm. This is followed by synthetic studies showcasing errors expected in microseismic event locations when anisotropy is neglected. In addition, a feasibility study of performing quasi-real-time anisotropic velocity model inversion during an ongoing hydraulic fracturing job is included.
Then, I present two different applications of the developed methodologies to the field data from a downhole microseismic survey that was carried out to monitor hydraulic fracturing in the Lower Paleozoic gas-bearing shales in Lubocino well, Northern Poland. In the first application, the VTI anisotropic velocity model inversion using the traveltimes of perforation shots is applied. The accuracy of the model provides high-quality locations of microseismic events induced during the hydraulic treatment. Then, the locations become a basis for a detailed stage-by-stage evaluation of the stimulation performance and provide information about geological units that were successfully fractured.
In the second application, I utilize shear-wave splitting (SWS) measurements to reveal weak azimuthal (HTI) anisotropy caused by aligned fractures. The HTI is dominated by stronger VTI fabric produced by the alignment of anisotropic platy clay minerals and by thin horizontal layering. I perform the rock-physics model inversion based on SWS measurements to finally obtain an orthorhombic stiffness tensor, which links the dominant VTI fabric with HTI anisotropy produced by the presence of aligned vertical natural fracture sets in the shale-gas reservoir.
Finally, based on both synthetic and real data examples, it is concluded that taking the anisotropy into account during the velocity model building in downhole applications always enhances the accuracy of microseismic event locations, and hence, raises the quality of the final assessment of hydraulic fracturing operation. It is also demonstrated that the proposed VTI anisotropic velocity model inversion can be implemented on-site during an ongoing industry operation.