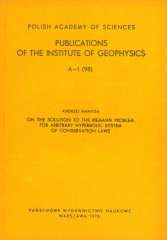 Using the evolutionary condition proposed by the author in ref. [11] we prove certain theorems related to the uniqueness of self-similar solutions to the Riemann problem for arbitrary strictly hyperbolic system of quasilinear conservation laws. The solutions are sought in the class of piecewise smooth vector functions of two variables and are assumed to satisfy the equations and the initial and boundary data in the weak sense. The discontinuity waves considered here include shock and reaction waves. We also prove dual extremum principles which are a partial extension of the Bethe-Weyl theory of hydrodynamic shock waves. The existence and certain global properties of Hugoniots are established. The case of degenerate eigenvalues (nonstrict hyperbolicity) is also considered. Applications to hydrodynamics, detonation and deflagration waves, shear waves, nonlinear thermoelastic plane waves follow.