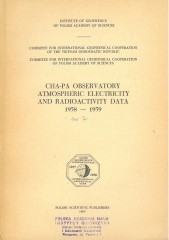 In connection with the International Geophysical Year a Polish-Vietnamese cooperation in geophysical measurements was instituted. One of its aim was the establishment of a new geophysical observatory at Cha-Pa. At the beginning (1957) it comprised a meteorological, aerological and magnetic station. Owing to the acute lack of measurement data on electricity of the atmosphere in subtropical regions the working program of the new observatory was extended to include observations in this field.