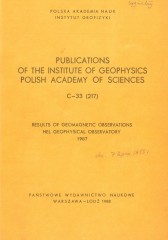 This volume contains the results of geomagnetic measurements carried out at the Geophysical Observatory at Hel near Gdańsk in 1987. It is a consecutive 10-th report of similar results published since 1966. A detailed description of the observatory and its history may be found in Publications of the Institute of Geophysics, Polish Academy of Sciences, C-5 (127).
Continuous photographic recording and absolute observations as well as the method of base determination have remained the same as in 1986. The data treatment and the form of publication are also the same.