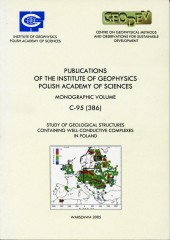 The topics of lectures and discussions covered a wide range of problems related to the two huge electrical conductivity anomalies existing in Poland, unique in the world scale. These are the North-German-Polish anomaly related to the Permian basin and the Carpathian  anomaly.

Main conductivity anomalies in Poland in relation to the geological structure

The main result of the geomagnetic sounding carried out in Poland since the beginning of 1960s was the discovery of the two huge magnetic anomalies. The first of these, related to the Permian basin, turned out to be a continuation of the large North German-Danish anomaly - the largest one in Europe, detected in the 1950s in Germany. The other, the Carpathian anomaly, was detected in 1960s, being then thoroughly recognized as a result of many-year joint Polish-Czechoslovak studies.

Carpathian anomaly of electrical conductivity: history of its discovery and interpretation

The Carpathian conductivity distribution anomaly is one of the most significant and best recognized conductivity anomalies in the world. It was discovered as a second in Europe, after the North German-Polish anomaly. Its discovery was based on the results of the so-called geomagnetic sounding in 1960s, and later confirmed by the results of magnetotelluric sounding and deep seismic sounding. We present here a brief review of experimental data and results of numerical modeling obtained in the last decades.

Modelling of conductance within the West and Ukrainian Carpathians

The magnetic variation data of the period range of 1000-6000 seconds recorded at 172 stations situated in the eastern part of the Czech Republic and in Polish, Slovakian and Ukrainian Carpathians were used for the modelling of conductance distribution within the Carpathian region. The dataset contains both the magnetic variation data recorded by the MT group of the Geophysical Institute, Prague, in cooperation with Polish and Slovak colleagues and presented in previous works and the data recorded by the groups from the Ukrainian Institute of Geophysics, Kiev, and the Carpathian Branch of the Subbotin Institute of Geophysics, Lviv.

The Carpathians high conductivity anomaly is most impressively desplayed by the reversal of almost hundred induction vectors along the course of the crest of the mountain range. Less is known about the more detailed magnetotelluric image of this anomaly, due to the high level of industrial noise in this area.

On electronically conductive nature of the Carpathian anomaly (geoelectric, geothermal and geodynamic aspects)

Practical significance of deep studies of the Carpathian Conductivity Anomaly (CCA) depends on resolving what is its origin. Up to the last time, the nature of high conductivity of  the object has been explained as being due to the influence of temperature and the presence of a fluid. A possible explanation of the CCA origin on account of the presence of electronically conductive graphite and sulphide-bearing rocks is proposed in this paper. We discuss electromagnetic evidences of the anomaly, its geological and tectonic position, geothermal field, electrical properties, distribution of the electron-conducting rocks, and some geodynamical aspects.

Anomalies of the Earth's electrical conductivity are usually imaged via induction arrows, for example on a map. Such images are very instructive indeed in the case of one elongated, well-conducting anomaly, since real induction arrows, indicating the horizontal direction where the vertical magnetic field caused by the anomaly is maximal, simply point away from the good conductor (if Wiese's convection is used).

Estimation of the deep geoelectrical structure beneath TESZ in NW Poland

In autumn of 2002 the first deep MT soundings have been carried out in the framework of the international project EMTESZ. Profiles of this project are situated not far from the seismic profile P2. The seismic method detected anomalously low velocities at depths of 10-20 km, the reason of which is unknown. Several years earlier, seismic tomography results had shown that an abrupt change of the S-wave velocity values coincides with the margin of the EEC.The recent study of the heat flows has shown that beneath the Pomeranian segment of TESZ, down to 200-km depth, the temperature is relatively low. The Geophysical Research Enterprise in Warsaw performed many magnetotelluric soundings and, in particular, a profile in this area and the estimates were that the sediment conductance reaches 3-5 kS.

The EMTESZ-Pomerania project deals with the study of deep conductivity structure of the whole lithosphere across the Trans European Suture Zone (TESZ) in Polish-German Pomerania. More than 90 LMT and 60 AMT soundings were accomplished along two regional geotraverses, LT7 and P2, in 2003-2004, and nearby profiles worked out in 2001-2005. The data acquisition scheme implied the arrangement of ther sounding sites into several spatially overlapping, simultaneously observed subsets, and installation of a number of continuously running field stations to serve as far remote references together with adjacent observatories (HLP, BEL, and NGK).

Short 2004 MT profile in the vicinity of TESZ

The main task of the international project EMTESZ is to achieve on the basis of electromagnetic methods an essential progress in understanding the structure, tectonic position and role of the Trans-European Suture Zone (TESZ) as a fundamental lithospheric boundary separating south-western and north-western Europe, which is supposed to have played a key role in the evolution of the Paleozoic orogens across the whole of Europe.

Characterization of the cultural electromagnetic noise

A large-scale international electromagnetic (EM) experiment is currently in progress due to its importance for a better understanding of the Trans-European Suture Zone (TESZ) in Polish Pomerania. The main objective of EMTESZ project is the study of deep conductivity structure across TESZ. EM measurements were carried out mainly along seismic profiles P2 and LT-7 crossing the suture zone and running to the north-east.

Recently, series of large-scale geophysical experiments around the Trans-European Suture Zone (TESZ) have provided a new insight into the nature and evolution of this most prominent tectonic boundary in Europe. This concerns, first of all, huge international seismic experiments like EUGENO S, BABEL, DEKORP-BASIN, and POLONAISE'97. Seismic survey is the most effective tool to study the Earth's structure; however, results of other geophysical methods, especially electromagnetic sounding, are very helpful for a better understanding of the very complex deep structure of the TESZ.

Array view on electromagnetic transfer functions in the EMTESZ-Pomerania project

The EMTESZ-Pomerania electromagnetic (EM) sounding array was implemented in Polish-German Pomerania across the Trans European Suture Zone (TESZ) during several field seasons in 2001-2004 mainly along 3 regional seismic transects, namely, P2, LT-7 and LT-2, giving a total of more than 90 long-period (LMT) and 60 audio (AMT) sites. In 2005 the array got northwestern extension with new 10 Polish and 2 German sites, including a site at the Bornholm island and two magnetovariational off-shore observations on the sea bottom.