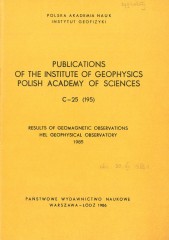 This volume contains the results of observation of the Earth's magnetic field for the year 1985 carried out at Hel. It is a consecutive 8-th report of similar results published since 1966.
Continuous photographic recording and absolute observation as well as the method of base determination have remained the same as in 1984.