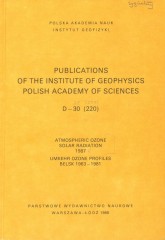 Ozone observations have been made by means of Dobson spectrophotometer No. 84 in the Geophysical Observatory at Belsk since March 1963. This publication presents all total ozone values and vertical distribution of ozone over Belsk in 1987 obtained from the conventional Umkehr observations as well as the corrected total ozone values for 1986.
Vertical distributions of ozone from Umkehr observations have been evaluated by the World Ozone Data Centre, Atmospheric Environment Service, Downsiew, Ontario, Canada. Vertical distributions of ozone, as well as daily values of total ozone, are also published by the Atmospheric Environment Service of Canada in cooperation with the WMO (Ozone Data for the World).