Signatures of Dual Mechanism of Plasma Sheet Formation and Structuring: A Study Based on Prognoz-8 Plasma Data 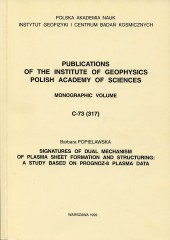 A unique orbit of Prognoz-8 satellite allowed for the near Earth (X > -20 RE) tail crossings below the lowest latitudes accessible for polar orbiting satellites like Heos, Hawkeye, or Prognoz-7 and above those accessible for satellites with an ecliptic orbit like ISEE-1, 2 or AMPTE satellites. By the same, Prognoz-8 provided plasma merasurements in the magnetotail region that has not been well investigated yet. Previous survey of Prognoz-8 plasma measurements in the tail by Jimenez et al. (1984) used the SKS instrument data. Another plasma instrument aboard was PROMICS-2 with wider angular and energy range coverage and a supplementary ion mass composition diagnosis (oxygen ions). Here the PROMICS-2 data are presented in a more complete way than in all previously published papers and they are analysed in the frame of recent empirical models of the magnetic and electric field in the magnetosphere, by Tsyganenko (1996) and Weimer (1996), respectively, with the use of the data from ISEE-3 and IMP-8 satellites on the concurrent conditions in the solar wind. Some of the results are the following:
1. The gross-scale structure of plasma in the near-Earth tail during conditions under the Interplanetary Magnetic Field (IMF) with a dominating northward BZ component (NBZ) is significantly different than under the southward IMF or under the IMF with a dominating BY-component. The quiet-time NBZ plasma sheet is relatively dense, with ions of an average energy below or close to 1 keV and electrons with temperatures of ~100 eV. Such a plasma sheet is built by populating the closed region from flanks with the Low Latitude Boundary Layer (LLBL) plasma slowly convecting toward the tail center. At the same time, in the central region of the tail a hotter plasma sheet may exist convecting earthward from the distant neutral line. In such a situation the LLBL-originated plasma sheet will form a "Warm Envelope" of the hot plasma sheet proper.
2. Under a dominating IMF BY > 0 during moderately disturbed conditions, the magnetic flux tubes just above the hot plasma sheet may be loaden with a relatively dense and warm (mantle-unlike), magnetosheath-like (MS-like), structured plasma. Such a "Warm Envelope" seems to convect from the magnetotail flank along Lennartsson's convection path.
3. During extremely disturbed conditions under a dominating strong southward IMF BZ, the plasma mantle with a copious ionospheric component may reach the plasma sheet at geocentric distances  R < 10 RE  and be locally accommodated into the hot plasma sheet be acceleration/heating and scattering within the Plasma Sheet Boundary Layer (PSBL) in the process of interaction with observed strong electric field fluctuations at appropriate frequencies and due to a possible slow-mode shock closer to the near-Earth neutral line.
4. During disturbed conditions, cold, well collimated beams of energetic oxygen ions were observed not only at the magnetopause and in the LLBL, mantle and lobe, but also in the high-latitude regions of the plasma sheet, sometimes as a very significant ion component. Such O+ beams were not just equatorward convected lobe ion beams, but apparently they originated from a different source, e.g., from the auroral zone or from the acceleration region of near-Earth neutral line.
5. A unique observation under a strong dominating IMF BZ of the stagnating, dense magnetosheath-like (but hotter than the magnetosheath proper) plasma in the lobe (corresponding to nearly simultaneous observations of soft plasma at very high latitudes by DE-1 and DE-2 satellites) were presented and interpreted as MS plasma trapped inside the high-latitude magnetosphere due to electric field distribution resulting from merging with the northward IMF poleward of the cusps.
6. In general, Prognoz-8 plasma data revealed that solar-wind driven reconfiguration of magnetic and electric fields, and the resulting changes of plasma convection, produce a richer plasma structure in the near-Earth tail than it was described in classical synthetic pictures.