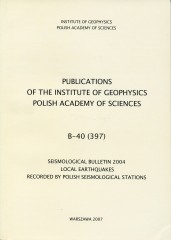 The majority of seismic events recorded in Poland are caused by mining activity in the Upper Silesian Coal Basin and Lubin Copper Basin. Induced seismicity is observed less frequently in the Rybnik Coal District and Bełchatów Open-Pit Mining area. The year 2004 was exceptional due to the occurrence of tectonic earthquakes, which even caused a slight, mainly non-structural damage to buildings. On November 30, 2004, an earthquake of local magnitude M = 4.4, macroseismic intensity Io = 7 in the EMS scale, followed by a long series of aftershocks occurred in the southernmargin of the intramontane Orawa-Nowy Targ Basin, Western Carpathians (Guterch 2006). On September 21, 2004, earthquakes of local magnitudes M = 5.0, 5.3, and 4.3 were observed in the Sambia Peninsula, western part of the Kaliningrad enclave, Russia. Two strongest Kaliningrad earthquakes were widely felt in northeastern Poland. The Kaliningrad earthquakes are rare examples of intraplate earthquakes in the low-seismic area.