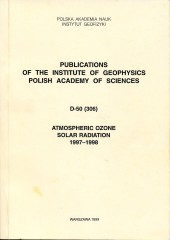 Ozone observations have been made by means of Dobson spectrophotometer No. 84 in the Geophysical Observatory at Belsk since March 1963. This publication presents all total ozone values and vertical distribution of ozone over Belsk in 1997 and 1998 obtained from the conventional Umkehr observations.

Total amount of atmospheric ozone and its vertical distribution, Belsk 1997-1998

Ozone observations have been made by means of Dobson spectrophotometer No. 84 in the Geophysical Observatory at Belsk since March 1963. This publication presents all total ozone values and vertical distribution of ozone over Belsk in 1997 and 1998 obtained from the conventional Umkehr observations.
Vertical distributions of ozone from Umkehr observations have been evaluated by the World Ozone Data Centre, Atmospheric Environment Service, Downsview Ontario, Canada. Vertical distributions of ozone as well as daily values of total ozone are also published by the Atmospheric Environment Service of Canada in cooperation with the WMO (Ozone Data for the World).

Total ozone, sulfur dioxide and UV-B radiation measurements with the Brewer spectrophotometer no. 64 at Belsk, Poland, 1997-1998

The Brewer spectrophotometer No. 64 has been installed in the Geophysical Observatory of the Polish Academy of Sciences at Belsk in February 1991.
The Brewer spectrophotometer is an optical instrument which measures atmospheric ozone and sulfur dioxide by examining intensities of the attenuated incident solar ultraviolet radiation at five specific wavelengths. The automatic, computer-controlled operation of the instrument allows different types of measurements and calibrations to be made according to an adjustable schedule. The instrument is capable of taking direct sun, zenith sky, UV-B and Umkehr measurements in unattended operation for several days.

Tropospheric ozone, sulfur dioxide, and nitrogen dioxide have been measured at Belsk throught 1997 and 1998. All measurements have been performed by automatic analysers produced by Monitor Labs Inc. (model 8810, 8841, 9850). The measurement site is located beyond the direct influence of pollution sources (in the region of agriculture activity) and can be considered as rural. The air intake is situated 7 m above the ground.

Tables - instrumentation and symbols used in the tables

Measurements of solar radiation were performed by means of a Sonntag pyrheliometer no. 03/82 with a Slandi MUC 2045 microvoltmeter no. 2283. Differences between measurements through different filters were used to obtain fluxes in eight spectral intervals and to calculate the mean (for n measurement series) values of the Linke turbidity factor, atmospheric transparency and aerosol optical depth.

A statistical analysis of monthly averages of the reevaluated 1963-1997 Umkehr ozone profile data is performed by means of multiple regression model. The model accounts for the long-term seasonal means, linear changes (trends in each calendar month) in the period 1980-1997, as well as for fluctuations in ozone related to the known forcing factors (solar activity, Quasi-Biennial Oscillations, Southern Oscillations) and to the North Atlantic Oscillations (NAO) effects. The analysis reveals statistically significant negative trends of about few percent per decade in ozone content integrated over broad layers: 1-5 (0-28 km), 8-10 (37.5 km - top of the atmosphere), as well as in layer 6 (28.0-32.6 km) and in layer 7 (32.6-37.5 km). The minimum of year-round trend, ~ -2% per decade, is found in layer 6. The strongest ozone depletion, about -5 to -6% per decade, occurs in broad layer 1-5 in spring, whereas in layers 7 and broad layer 8-10 it occurs in autumn. Ozone in the lower and middle stratosphere seems to be significantly influenced by the NAO during winter.