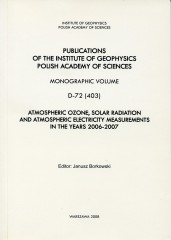 Total amount of atmospheric ozone with the Dobson spectrophotometer No. 84 at Belsk, Poland, 2006-2007

Total ozone, sulfur dioxide and UV-B radiation measurements with the Brewer spectrophotometer No. 64 at Belsk, Poland 2006-2007

Variability of aerosols forcing on the surface UV radiation: analysis of data taken at Belsk, Poland, in Spring 2007

Potential impact of the atmospheric aerosol on surface UV radiation is presented. Sun-photometer data collected at Belsk in the period March 27 − April 19, 2007, as well as satellite data, were used to estimate the UV irradiance response to the aerosols optical depth (AOD) changes during smoke/dust event and advection of the clear Atlantic air mass. The mean attenuation of the erythemally weighted surface UV irradiance due to smoke was ~3% in the case of sun-photometer data and ~7% in the case of satellite data, whereas ~10% increase relative to the overall mean UV level was estimated during the clear Atlantic air episode.
It seems that the satellite observations can provide accurate estimate of the aerosol optical depths for “clear” air masses and when the AOD exhibits small intraday variations. It was also found that extrapolation of satellite data to UV range leads to an overestimation of AODs.

Ultraviolet radiation measurements at Belsk Geophysical Observatory in 2006 and 2007

Results of over 10 years of lidar measurements of stratospheric aerosol at 532 nm wavelength have been analysed. Averaged stratospheric aerosol optical depths and selected profiles of scattering ratio versus altitude are presented. Their analysis in relation to historical results of several authors in the sixties, seventies and eighties of the last century is made. It has been found that in the years 1996-2006 the stratosphere underwent a cleaning process, manifesting itself by decreasing aerosol optical depth, down to a level of about 0.002, that is, to the aerosol background level typical of the period before the Pinatubo eruption in 1991.

Lightning research activities in the Institute of Geophysics, Polish Academy of Sciences, in the years 2006-2007