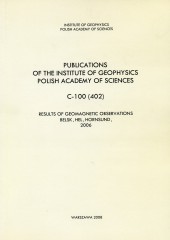 Poland has three magnetic observatories: Belsk, Hel and Hornsund. Yearbooks for these observatories have been published regularly since 1966 for Belsk and Hel, and since 1978 for Hornsund. During the years, formats of yearbooks have been changing.