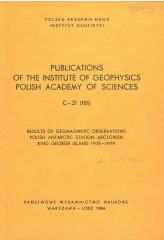 The Arctowski magnetic station was established during the Second Antarctic Expedition of the Polish Academy of Sciences in 1977/1978. At that time, a group of workers from the Institute of Geophysics built a geophysical laboratory and two magnetic pavilions: a recording pavilion and a pavilion for magnetic measurements. The Arctowski magnetic station is located in King George Island in South Shetland archipelago.
This volume contains the results of Geomagnetic Observations at Polish Antarctic Station Arctowski, King George Island in the years: 1978 & 1979.