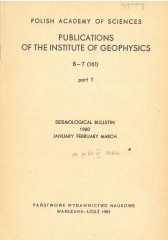 This bulletin contains a list of local earthquakes recorded in 1980 by the Polish seismic network. The origins of these shocks are either within the area of Poland or in the vicinity of its southern border. The bulletin consists of two parts. In the first part major shocks from the Upper Silesian Coal Basin and the Rybnik Coal District are listed and in the second part seismic events from the Lubin Copper Basin and from the Bełchatów surface mining area of brown coal are given, as well as weak unidentified local shocks with distinct P and S waves records.

The bulletin is based on the records of seismic stations of the Institute of Geophysics, Polish Academy of Sciences, at Kraków (KRA), Niedzica (NIE), Racibórz (RAC), Rybnik (RBN), and Książ (KSP), seismic station of the Planetarium and Astronomical Observatory at Chorzów (CHZ), and seismic station at Dąbrowa Górnicza (DGP) of the Central Mining Institute.