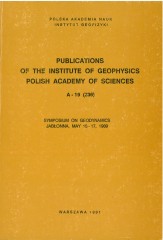 Between the Veriscan orogen and the edge of the East European Platform there runs a strip of the North German-Polish Caledonides. They are an orogen which formed as a result of a sinistral strike slip in the Silurian period. Because of the strike slip movement, the litosphere was broken up, divided into blocks, and then the blocks were shuffled, docked and concentrated at the cut-off edge of the East European Platform.
The fragments of the lithosphere welded into an orogenic belt are terranes. They are characterized by mutually different courses of sedimentation and tectonic development as well as metamorphism in the epochs prior to strike slips. From the Late Silurian this development began to be uniform for the terranes and adjacent part of the East European Platform, and only differentiated by local conditions. Considerably thick mudstones and flysch-like greywackes, related to the elevation of the internal parts of the orogen in the final stage of the strike slip movements, began to form in the Ludlovian. These sediments are counterparts to molasse. The Polish terranes come from the area of the present British Isles. In the Early Cambrian this area was reached by the Holmia biofacies, specific of Scandinavia. On the other hand, the terranes which built these isles came from the area of the Apalachians and had different biofacies in the Early Cambrian.