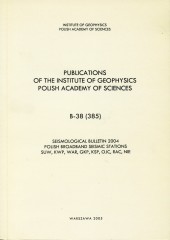 The year 2004 was unique not only because of the occurrence on December 26 of a giant M = 8.8 earthquake near the coast of Sumatra and the following tsunami, causing over 200,000 casualities on the coasts of the Indian Ocean. The year saw also the totally unexpected earthquakes of Kaliningrad Region on September 21, the greatest earthquakes ever noted in Northern Poland and a relatively strong quake in Podhale Region in Southern Poland on November 30, spurting off a long series of aftershocks.