Paleomagnetism and Magnetic Properties of Rocks 1975 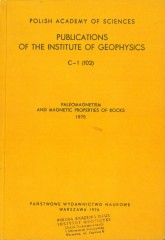 Palaeomagnetic investigations of basaltic rocks from ten exposures of Bohemian Massif were performed and the results were compared with corresponding results obtained for the rocks from Lower Silesia. The high scatter of NRM directions after a.c. demagnetization was observed for rocks containing highly oxidized titanomagnetites. It was concluded, that oxidation processes in these rocks took place in low temperatures and primary NRM was not preserved. The scatter of NRM directions after a.c. demagnetization in the rocks containing weakly oxidized titanomagnetites is smaller. The mean directions of NRM and pole positions obtained for three groups are consistent with those reported in the literature for the Tertiary.