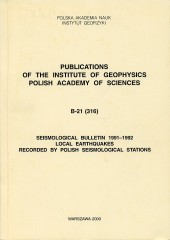 The bulletin contains a list of local seismic events recorded in 1991-1992 in Poland. Most of these events were induced by mining in the Upper Silesian Coal Basin, Rybnik Coal District, and Lubin Copper Basin. A few local tectonic earthquakes occurred only in 1992 in the Western Carpathians in the border area between Poland and Slovakia, and in the Sudetes in the border area between Poland and the Czech Republic.