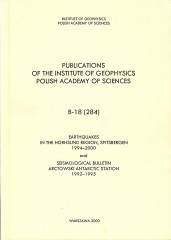 The data of earthquakes in the Hornsund region, recorded at the Hornsund station from January 1994 until April 2000, have been analysed. Scaling relations (seismic moment M0 vs. source radius r0 and energy E0 vs. seismic moment M0) are presented. The results were compared with analogous relations for other series of seismic events, in particular those in coal and copper mines. A comparison of scaling relations for three earthquake series singled out in the Hornsund region has been made.