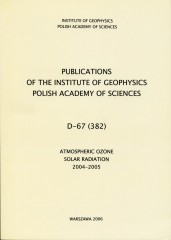 Ozone observations have been made by means of Dobson spectrophotometer No. 84 in the Geophysical Observatory at Belsk since March 1963. This publication presents all total ozone values and vertical distribution of ozone over Belsk in 2004 and 2005 obtained from the conventional Umkehr observations.

Total amount of atmospheric ozone and its vertical distribution, Belsk 2004-2005

Ozone observations have been made by means of Dobson spectrophotometer No. 84 in the Geophysical Observatory at Belsk since March 1963. This publication presents all total ozone values and vertical distribution of ozone over Belsk in 2004 and 2005 obtained from the conventional Umkehr observations.
Vertical distributions of ozone from Umkehr observations have been evaluated by the World Ozone Data Centre, Atmospheric Environment Service, Downsview Ontario, Canada. Vertical distributions of ozone as well as daily values of total ozone are also published by the Atmospheric Environment Service of Canada in cooperation with the WMO (Ozone Data for the World).

Total ozone, sulfur dioxide and UV-B radiation measurements with the Brewer spectrophotometer No. 64 at Belsk, Poland, 2004-2005

The Brewer spectrophotometer No. 64 has been installed in the Geophysical Observatory of the Polish Academy of Sciences at Belsk in February 1991.
The Brewer spectrophotometer is an optical instrument which measures atmospheric ozone and sulfur dioxide by examining intensities of the attenuated incident solar ultraviolet radiation at five specific wavelengths. The automatic, computer-controlled operation of the instrument allows different types of measurements and calibrations to be made according to an adjustable schedule. The instrument is capable of taking direct sun, UV-B and Umkehr measurements in unattended operation for several days.

Tropospheric Ozone, Sulfur Dioxide, Nitrogen Dioxide and Carbon Monoxide have been measured at Belsk throughout 2004 and 2005. Measurements have been performed by automatic analysers produced by Monitor Labs Inc. and Advanced Pollution Instrumentation, Inc.

The total ozone measurements by Belsk's Dobson spectrophotometer have been compared with the satellite total ozone taken during the OMI (on board of Aura spacecraft) overpasses for the period August 2004 - July 2006. The agreement between both data sets is much better if the results of the recent (June 2005) calibration campaign of Belsk's Dobson at Hohenpeissenberg are incorporated to the standard total ozone calculation software. The bias and standard deviation of the normalized differences between the satellite and Dobson total ozone are less than 1% and 2-3% (lower range of standard deviation is for the most reliable ADQP obervations), respectively, for the period. These estimates correspond to those found for the satellite-Dobson comparisons carried out for Hradec Kralove and Hohenpeissenberg.

UV measurements at the Polish Polar Station, Hornsund, calibration and data for the period 2005-2006

Measurements of various radiative quantities have been resumed at the Polish Polar Station, Hornsund, in spring 2005. The UV-B, UV-A, total solar irradiances and the sunshine duration with 1-min resolution are available there, together with the aerosols characteristics (single scattering albedo, aerosols optical depth). The quality of the UV data is assured by comparison of the instruments' readings with the output of Institute of Geophysics, Polish Academy of Sciences, traveling UV calibration system. The daily and seasonal variations of UV-B, UV-A, and total solar irradiance are discussed for the period March 2005 - September 2006. The daily doses of UV-B, UV-A, daily sum of the total solar irradiance, and the UV index are shown in the table. The maximum value of UV daily dose and UV index found in late spring were ~3000 Jeryt/m2 and ~4, respectively. These values are larger than our previous estimates obtained from the biometer measurements (5-min resolution) over the period 1996-1997 (Krzyścin and Sobolewski, 2001). Importance of the ground albedo variations on the UV-B irradiance is demonstrated and a need of setting off such observations at Hornsund is suggested.