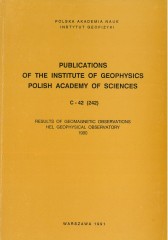 This volume contains the results of the observations of the Earth magnetic field for the year 1990, carried out at the Geophysical Observatory at Hel near Gdańsk. It is a consecutive 13-th report of similar results published since 1966.
A detailed description of the observatory and its history may be found in the Publications of the Institute of Geophysics, Polish Academy of Sciences, C-5 (127).