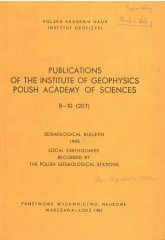 Empirical relationships for magnitude were derived for local shocks recorded by short-period seismographs at seismological stations of the Institute of Geophysics at Książ, Kraków and Niedzica. Shocks from the Lubin Copper Region and from Upper Silesia were taken into account. Two methods of magnitude determination were applied: based on the maximum velocities of ground vibrations, and on the relationship between the amount of seismic energy and the shock duration.