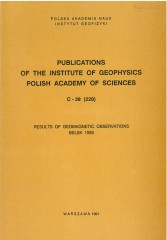 The publication contains results of geomagnetic observations performed in 1989; it is a consecutive, 24-th issue in the series of yearbooks listing observations of the natural magnetic field of the Earth at the Central Geophysical Observatory at Belsk. The Observatory is a part of the Institute of Geophysics, Polish Academy of Sciences. It is located at the edge of a wood complex, some 50 km south of Warsaw.