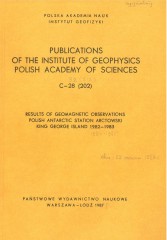 This volume contains the results of observations of the Earth magnetic field for the years 1982 and 1983 carried out at the Polish Antarctic Station Arctowski situated in King George Island (South Shetland Archipelago). In 1982 and 1983 the Arctowski Magnetic Station has been continuing its activity began in 1978.