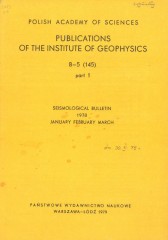 This bulletin presents the results of observations of distant earthquakes recorded by the seismic stations of the Institute of Geophysics of the Polish Academy of Sciences, including the Arctowski Antarctic Station, from October to December 1978. The local earthquakes recorded by the Arctowski Antarctic Station from March to December are listed separately (part 5).