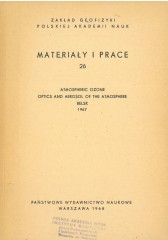 Ozone observations have been made by means of Dobson No. 84 spectrophotometer in the Geophysical Observatory at Belsk since March 1963.
Vertical ozone distribution is illustrated by two kinds of tables: the results of "umkehr" observations and the vertical distribution of ozone computed by the Meteorological Service of Canada under the sponsorship of WMO. 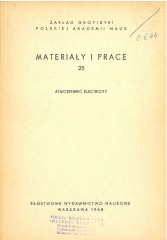 The papers assembled in this volume report some of the results obtained by the Group working on atmospheric electricity in the Institute of Geophysics of the Polish Academy of Sciences. The papers are written by the members of this Group and by foreign research workers during their stay at the Institute.
The Group started work in 1954. Some of the findings and observation data have been published in ACTA GEOPHYSICA POLONICA, PRZEGLĄD GEOFIZYCZNY and ANNALS OF THE GEOPHYSICAL OBSERVATORY OF THE POLISH ACADEMY OF SCIENCES IN ŚWIDER. A collection of reports of the Group dealing with the observations on atmospheric electricity from the new organized station at Geophysical Observatory in Cha-Pa (Democratic Republic of Vietnam) appeared in MATERIAŁY I PRACE fasc. 7 ex 1965. 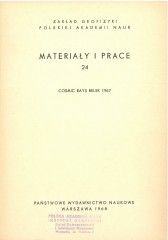 This volume contains the second collection of data, representing the results of a continuous annual registration of the meson component of cosmic radiation observed by means of cubical meson telescopes.
It comprises data, collected in 1967, at the Station of Cosmic Radiation of the Central Geophysical Observatory in Belsk. 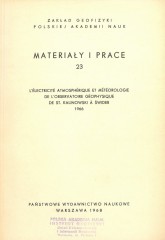 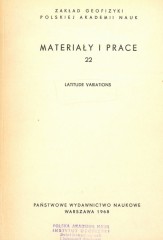