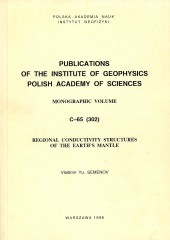 The publication describes the regional electromagnetic soundings of the Earth's mantle, mainly those performed and analyzed by the author during the last ten years. Theory as well as methodical and data processing details of the deep magnetotelluric and magnetovariation soundings have been  considered for isotropic, anisotropic and nonlinearly conductive media. The response differences observed using geomagnetic observatory or satellite data for different regions are discussed in relation to surface conductance and the lithosphere plate boundaries. The results of the mantle conductivity estimations in Poland, Hungary, Ukraine, Slovakia and Byelorussia are compared with those in some other regions of the Earth. The sounding results obtained in the North Pacific region, including an active subduction zone at the Sakhalin Island, are presented too. Problems of the lower mantle conductivity estimation and the existence of highly conductive layers, such as the asthenosphere and the 700-900 km zone, are discussed taking into account their possible lateral geoelectrical inhomogeneities.