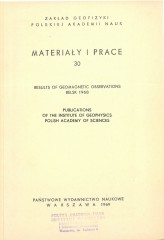 This volume gives the results of geomagnetic observations performed at the Central Geophysical Observatory Belsk in 1968. It is the 3-rd consecutive report on typical normal-run magnetic recordings of the Observatory. The results for 1966 and 1967 were published in Materiały i Prace, vol. 20 and 27, respectively (Publications of the Institute of Geophysics, Polish Academy of Sciences).