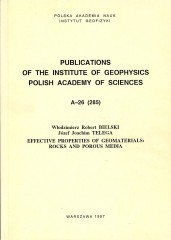 This comprehensive survey consists of two parts. In Part I we present the available results concerning the effective properties of cracked materials, mainly rocks. The second part of the paper deals with the transport and effective properties of porous materials in the case of a rigid and deformable skeleton. The whole paper is oriented towards applications in geophysics and geomechanics. Thus, much attention has been devoted to two-phased media, which model the upper crust of the Earth. Such media may be either isotropic or anisotropic cracked elastic bodies, though their behaviour can also exhibit inelastic features. Porous media may be dry, saturated or partially saturated. One-phase and multi-phase flows through porous media have been considered. 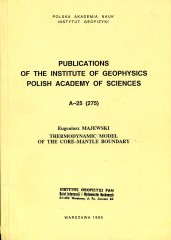 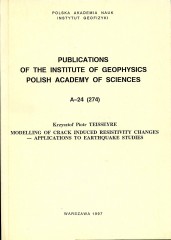 An anisotropic resistivity model of rocks that contain spatially oriented crack systems is presented. Each system consists of open cracks filled in with material of different resistivity than that of the rock frame; the cracks in the system have the same orientation and shape. Generally speaking, the resistivity change caused by inclusions (cracks) is intermediate between two extreme cases: inclusion effect expressed by connection in series, and inclusion effect expressed by parallel connection. Resistivity changes in three directions are attributed to geometry of the cracks, so the resistivity tensor is calculated for a specified crack geometry, by adding serial and parallel part of the change.

Paleomagnetism of the Paleozoic Rocks of the Holy Cross Mts (Central Poland) and the Origin of the Variscan Orogen
Author(s): Lewandowski M.
Volume: 265
Series: A-23
Export 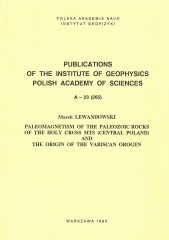 The Holy Cross Mts are an old, Paleozoic massif, situated close to the Tornquist-Teisseyre Tectonic Zone and structurally incorporated into the Epi-Variscan platform. The area consists of two main units, namely the northern (NHCM) and the southern (SHCM), separated by the west-northwesterly striking Holy Cross Dislocation. Both regions differ significantly in the history of facial development, continuity of the stratigraphical record, the thickness of rock successions and the history of geotectonic development. An interesting question was whether these differences were also reflected in the paleomagnetic record.

A Kinetic Model of the Evolution of Cracks
Author(s): Czechowski Z.
Volume: 262
Series: A-22
Export 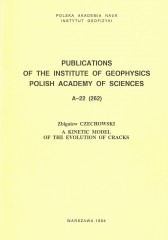 The paper presents a kinetic approach to the problem of evolution of numerous cracks. The ensemble of microcracks is described by the size distribution function of cracks. Using the methods of the kinetic theory of gases, we derive the nonlinear, integro-differential equation of evolution of the size distribution function. We assume that cracks can nucleate with some nucleation rate, propagate with probability P and velocity v, and that they can coalesce with other cracks. The probability of crack fusion is defined by fusion cross-section.