Determination of Source Parameters from Seismograms of Mining Tremors and the Inverse Problem for a Seismic Source
Author(s): Cichowicz A.
Volume: 147
Series: A-11
Export 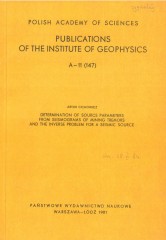 Problem of seismic source modelling are considered. Changes in a theoretical pulse shape depending upon the adopted model of slip velocity on the fault plane are analyzed in details. The influence of the medium and of the recording instrument upon the pulse form is taken into account. Additionally, ground motions were determined from deconvolution of real records. A simple method of determining the source parameters directly from seismograms is described. 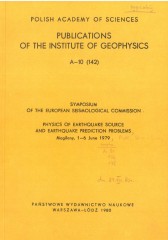 This volume contains the papers from Symposium of the European Seismological Commission "Physics of Earthquake Source and Earthquake Prediction Problems", Mogilany, 1-6 June 1979. 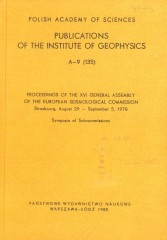 Proceedings of the 16th General Assembly of the European Seismological Commission, Strasbourg, August 29 - September 5, 1978 contains the papers (or their abstracts only) which were presented at the meetings of subcommissions and working groups. The present volume also contains some papers which for technical reasons were not submitted on time for the preceding volumes of papers from Strasbourg. A few papers which were presented during the symposia in Strasbourg but were not mentioned in the announcement for the ESC meeting are also included. 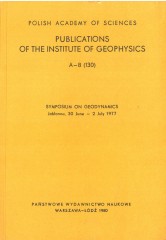 This volume contains the papers from Symposium on Geodynamics. Jabłonna, 30 June - 2 July 1977.

Methods of the Optimal Planning of Regional Seismic Networks
Author(s): Kijko A.
Volume: 119
Series: A-7
Export 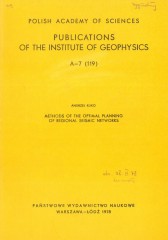 General principles for the optimum distribution of any nuber of regional seismic stations are formulated. The distribution of seismic activity i.e. the probability of an earthquake occurrence in a given point of a seismic region, and travel times of seismic waves used for earthquake location must be known. To define the optimum distribution of a regional network, some generalization of A and D-planning (minimization of the function of the ellipsoid volume of earthquake location errors) was applied. The optimum criterions are generalized for a case where equations describing the process are nonlinear and when the most probable values of the sought parameters (origin time and earthquake focus coordinates) are not known.