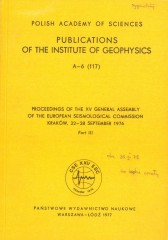 This volume presents the Part III, the last containing the proceedings of the XV General Assembly of the ESC. Papers and reports presented and discussed at the meetings of the subcommission and working groups are included in this volume. 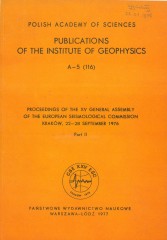 Proceedings of the XV General Assembly of the European Seismological Commission, Kraków, 22-28 September 1976. Part I
Author(s):
Volume: 115
Series: A-4
Export 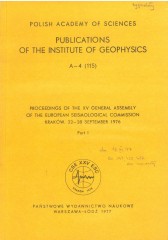 This volume contains the proceedings of the first three symposia held during the XV General Assembly of the European Seismological Commission. The papers presented at symposia IV-VIII and during scientific sessions organized by the subcommissions and working groups will be published in Part II and III of the proceedings. 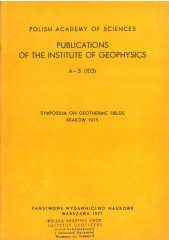 More than 800 heat flow data from Central and Eastern Europe were used to construct the isolines of the surface heat flow distribution. This work was done under the multilateral cooperation of the socialist countries within the Commission for Planetary Geophysical Investigation (KAPG), Working Group for Geothermics. The paper briefly summarizes the original sources of information on the heat flow in various countries, describes the characteristic features of the prepared heat flow map and introduces the most important geological implications, which can be concluded from the obtained heat flow pattern. The characteristic deep crustal temperature profiles were calculated for several chosen provinces using the results of deep seismic sounding data together with the adapted models of the crustal distribution of thermal conductivity and radioactivity (heat production). 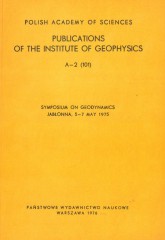 The four DSS profiles made in the southern Poland and adjoining areas have shown that the marginal zone of the Old Platform is cut by two rift zones, in which the M-surface is situated at the depths exceeding 55 km. At least one of these zones is related to the Variscan tectonic trough from the suprastructure. The rift zones are delineated by deep fractures on the east. The M-surface rises to the west, towards the margin of the Old Platform. To the north, the LT2 profile made in the Bydgoszcz area enabled more accurate interpretation of the results of the VII profile. The rift zone coincides here with the Mid-Polish aulacogen active in the Mesozoic and possibly Late Paleozoic in the case of that section.